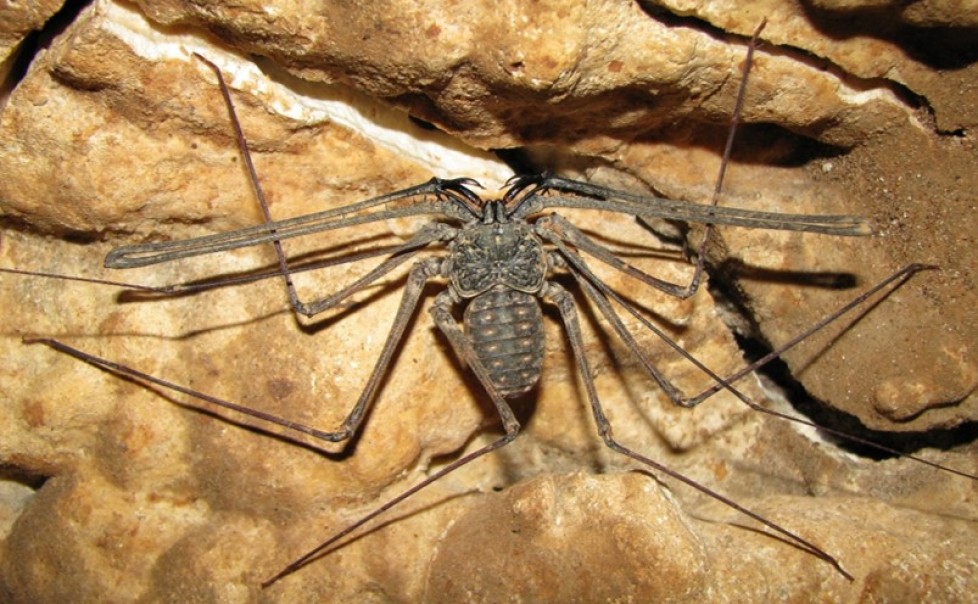 The amblypygids are often mistaken for spiders by lay people and appear to be  dangerous to most of the public. These animals, scary-looking to some, present no threat to humans, as they have no venom and behave as predators of insects, arachnids and other small vertebrates. The Amblypygi have a flattened body, large pedipalps provided with spines and the first pair of legs greatly elongated and with a sensory function. They occupy different environments, such as tropical forests, arid environments and caves.

Three genera of Amblypygi are present in Brazil, related to the Phrynichidae, Phrynidae and Charinidae families. The Trichodamon genus belongs to the first family mentioned and comprises only two species. Trichodamon have occurred in many Brazil caves, especially in the northeastern and central-western Brazil, and northern Minas Gerais. The representatives of this genus are known in some northern regions as "tractor spider", due to their large body size. The Heterophrynus, included in Phrynidae are animals with large, sharp pedipalp spines. There are species found in caves in the northeast, southeast and north-central Brazil. The genus Charinus, which belongs to the latter mentioned family, are small sized amblypygids. Four of their eight described species occur in cave environments in the northeast and southeast, two of them being considered the only troglobite Amblypygi species in Brazil. There are many Charinus cave species still being described.

Caves represent environments with favorable conditions for amblypygids, which occupy these habitats throughout most of the country. They act as one of the largest predators in these environments, given that the fauna of subterranean cavities comprises mostly insects and other arachnids. Since they have nocturnal habits, amblypygids may also use the caves as shelter during the day.