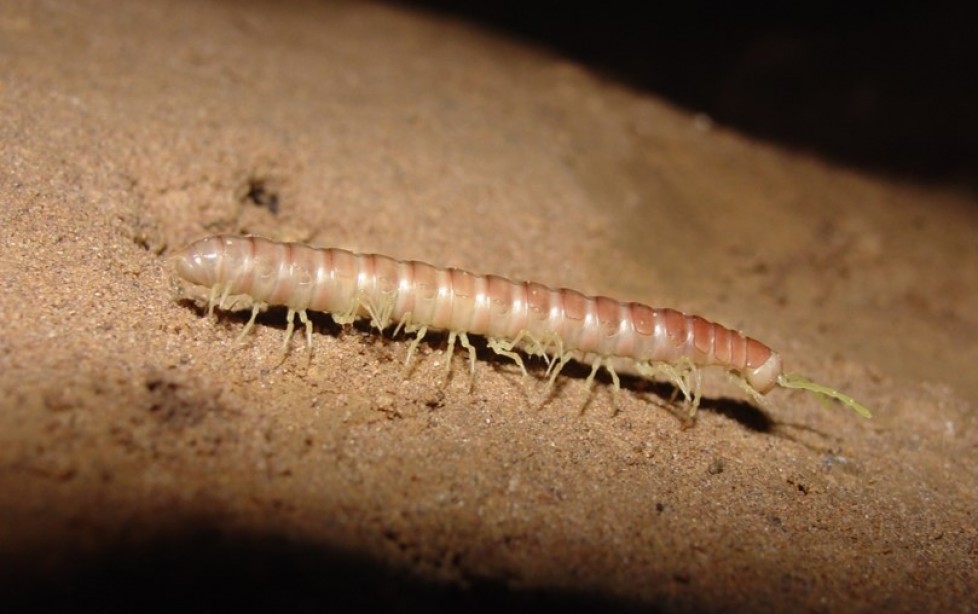 Among the invertebrates found in Brazilian caves, the millipedes (Diplopoda Class), are easily identified due to their usually elongated body divided into a head and a trunk segmented in numerous rings. Body color can vary from group to group and red, yellow , brown and black  individuals are often found. Each ring has two legs and two pairs of pores for gas exchange, known as spiracles. They also have other pores (ozopores), on the side of the body whose function is to release protective chemicals, but not harmful to humans. In the head, besides a pair of antennae, they may or may not have two cavities of sensory function (Tomosvary organs) or two eyes, i.e, these animals could be blind. Near its jaws there is a plate shaped structure called the gnathochilarium. This is exclusive to millipedes and has an important function in their alimentation. The millipedes belong to the group called detritivorous animals, that is, they feed on any organic matter in sediments, thus important for nutrient recycling.

The identification of males and females is not a difficult task when they are adults. In the breeding season, a different structure is formed in males (gonopods), between the sixth and seventh ring, and its function is to transfer spermatic fluid to females. Females, after fertilizing their eggs with the liquid, can lay dozens of eggs in holes dug in the ground, however, without much care after they hatch.

In Brazil, the most common millipedes found in caves belong to three large groups, Polydesmidas (Polydesmida Order) known to be completely blind and for their lateral projections on the trunk (paranota), which can be quite variable and ornamental in several species. Polydesmida can be white and small sized, as the ones from Pyrgodesmidae, Polydesmidae and Fuhrmannodesmidae families or even large and colored, as thos from the Chelodesmidae family. The Spirostreptida (Spirostreptida Order) have a more elongated body without paranota. For this order, two families are quite common: Pseudonannolenidae and Spirostreptidae. These animals have compound eyes and many visible ozopores throughout the body. Similar to Spirostreptida there are the Spirobolida (Spirobolida Order), which differs by being generally wider and with the antennae closer to the head. An important family of this group is Rhinocricidae.

In the country, only a few species unique to caves are known, but there is a great potential to find more. These species generally have fewer ocelli (small units that form their eyes), more elongated antenae, much smaller or much bigger size than normal and more depigmented body. They can be found walking on the ground or walls, and sometimes close to their food, such as bat guano, other animal carcasses or leaf remains brought from the external environment. The biology of these animals compared to their relatives of the outside area, is still littse known and studied. The amount of eggs that females produce, how many individuals are born, their development or if they release different chemicals is not really known. Therefore, many new things can still be discovered from these animals, leaving it to us to understand them more and thus preserving them as well as the environment in which they live.