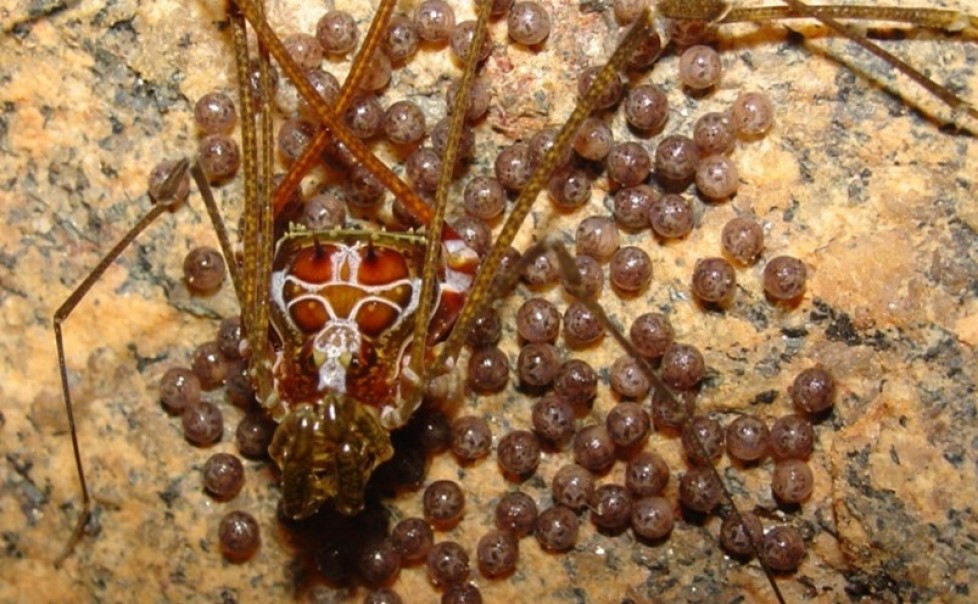 Opiliones is the third most diverse order among the Arachnida class, divided into 4 suborders, with 49 known families and about 6500 species, with many new species still to be described. They live in moist, dark environments, under rocks and logs, in trees and caves. They occur in all terrestrial habitats and on all continents except Antarctica. The name Opilio has Latin origin and means "shepherd" due to the use of their second pair of legs to inspect the environment around them. Harvestmen have a compact body with the prosoma (cephalothorax) widely fused to the opisthosoma (abdomen). In the prosoma, there are the chelicerae, the pedipalps, four pairs of legs, the second pair often being elongated and used as a sensory appendage (sometimes exceeding an incredible 30cm long) and also presenting a pair of eyes. On the lateral margins of the prosoma, is the opening of a pair of glands that release unpleasant odor secretions, such as alcohols, ketones, aldehydes and quinones, thus the common name “stinky spiders" (in Brazil). Many harvestmen from the suborder Laniatores exibit paternal and maternal care, paternal care being extremely rare, found only in a few groups of amphibians, fish and some bird species, arthropods and polychaetes (aquatic worms). Studies indicate that paternal care in harvestmen may have been successful due to the fact that when a male harvestmen takes care of the eggs of females, it indicates that he would be a "good protector" of the eggs, thus increasing the attractiveness of males to females, which ends up making them mate with several females and care simultaneously for all their eggs. They are the only arachnids with direct fertilization, along with some mites, with males having a penis and females a reversible ovipositor.

This species of this group have the most variety of possible colors, like yellow, black, red and green, and some species possess dry-marksI on the dorsal part of the body, which disappear if stored in alcohol and may reappear if the animalt is dry, being an important taxonomic character for the identification of many species.

There are several troglophile and trogloxene species recorded for caves in Brazil, such as Phalangodidae, Cosmetidae, Stygidae, Pachylinae, Gagrellidae, Tricommatinae, Caddidae, Mitobatinae and Goniosomatinae, the last cited being that with the largest number of behavioral and ecological studies. These species use caves as shelters during the day, forming clusters on cave walls, and leaving them at night to forage in the epigean environment.

Opiliones is a very diverse order present in caves, however, the scarcity of specialists in this group, allied to widespread confusion regarding taxonomic classifications made decades ago along with the lack of recent revisions, makes secure identification a difficult task, probably underestimating the rich diversity present, not only in the hypogean environment, but epigean as well.